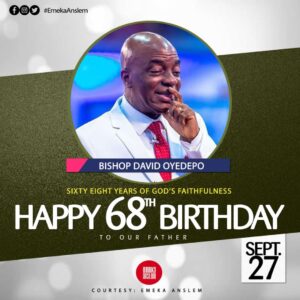 Speaking of leadership, a man can easily tell where he’s going by who is leading him. Show me your leader and I’d accurately predict your future.

If you’re driving in a slow moving traffic and suddenly experience an unnecessary delay, chances are that a vehicle ahead of you has developed a fault. And if you don’t switch to another lane, you’d have to endure till that vehicle restores motion. That’s how much leadership can influence a person’s life.

Many people are wallowing in poverty and depravity because of bad leadership, yet they won’t make efforts to change who is leading them.

Now I’m not talking about your president or government, ofcourse good governance also has its advantages – which is actually why many people travel abroad, but I’m talking about the people who you chose with your heart to lead you. If they’re not doing well, change them, you don’t have another life.

We keep saying the country is bad and things are hard, well, when God led me to Winners Chapel in 2010 to be mentored by Bishop David Oyedepo, things were hard and the country was bad. I don’t think there’s ever been a year when things were not hard since that time, but despite the hardness, I overcame, my path has continued to shine brighter and brighter, and that’s because I followed a leader who knew how to overcome hardness.

I believe we all can succeed despite terrible political leaders. We just need to be more deliberate about the people we trust to lead our personal lives. Don’t choose leaders who are weak during tough times. Don’t choose a financial coach that is having financial problems, don’t choose a pastor that doesn’t have the level of anointing and grace you need. Don’t manage them just because you know or love them, emotions won’t change anything, believe me! Ofcourse you can relate with them, but don’t trust them with your life.

The year is almost ending, and some of you haven’t even come close to what you had as a new year resolution. While you’re tempted to blame the government, I want you to think deep, you’d realize that the only person responsible for your inabilities is “you”. You managed your leaders when you should have changed them.

For God’s sake, don’t let a divorcee be your marriage counselor, neither should you permit a womanizer into your space. What advice do you hope to get from them?

I really hope that this brings deliverance to someone.

Now since it’s Papa’s day, I trust we’d all uphold him in prayers. But let’s add a little spice to it.

Mine… “lift up those two hands…”

LADIES CAN HAVE THE MAN OF THEIR DREAMS…

LADIES DON’T GET OVERDUE FOR MARRIAGE…

I WANTED US TO PLAY AGAINST ARSENAL…

“Pastor, I think I love my family more than I love my wife. Do you think this will pose a threat to my marriage?”

“Pastor, the year has almost ended, and everything God promised me has not come to pass. Isn’t this a hopeless situation?”

“Pastor, I discovered my purpose very early in life and I’ve been working in it for years now, but I can’t say I’ve made any significant progress. I need your counsel”